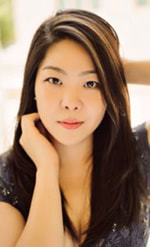 Soprano Stella Bokyung Yoon was recently seen as Valerie/Violetta in Robert Hatten’s Compassion. She was seen as Rosalinde in Die Fledermaus, Pamina in Die Zauberflöte, Cio-Cio-San in Madama Butterfly, La Ciesca in Gianni Schicchi, Mmd. Lidoine in Dialogues des Carmélites, Gretel in Hänsel und Gretel at the Butler Opera Center during 2015-2018 seasons. Also, Stella was seen as Musetta in Barrier Free Opera in Houston and Cio-Cio-San at the Madama Butterfly Preview at the Austin Opera in 2017. She also was seen as Micaëla in Carmen in Miami Summer Festival in 2015.

​Stella holds a Doctor of Musical Arts Degree from the University of Texas at Austin (2018) under the tutelage of Darlene Wiley and is a graduate of the prestigious Jacobs School of Music at Indiana University. Yoon has been mentored by world- renowned sopranos Virginia Zeani and Carol Vaness.