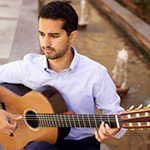 In his guitar teaching, Stephen aims to make music making a joyful and natural part of life. During his undergraduate studies at the University of Texas, Stephen started the classical guitar program at the Austin School for the Performing and Visual Arts, a 6-12th grade arts academy in Austin, where he taught for two years. For the last two years, he has taught at a summer program where he taught pop and rock guitar, in addition to classical.

Since childhood, Stephen Krishnan has performed throughout the country in award-winning guitar ensembles including the University of Texas Guitar Quartet and the Global Guitar Duo. Recently, the UT Guitar Quartet was invited to perform in an ensemble showcase at the Guitar Foundation of America festival and competition in Louisville. He has won top prizes in several competitions, including first prizes at the Schubert Club Competition, Thursday Musical Competition, Brownsville Guitar Ensemble competition, Hill Country Ensemble Competition, and second prize at the Pacific Guitar Festival. Stephen is also active in the early music world. He recently played baroque guitar with the University of Southern California Baroque ensemble at the Early Music America Festival in Berkeley.